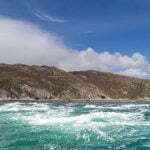 In the north of the Isle of Jura, between the Isle of Scarba and Jura, is the Corryvreckan Whirlpool. Corryvreckan is the third largest of these natural phenomenons and can be a spectacular sight to see. The dangerous currents, standing waves and sudden calm waters between the two islands of Jura and Scarba usually appear around the changing of the tides, and most of all during … END_OF_DOCUMENT_TOKEN_TO_BE_REPLACED