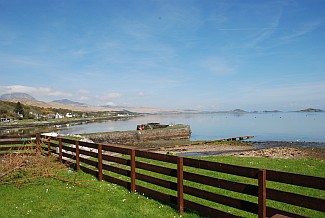 Since last week the Isle of Jura is host to the Sands Contest Group. A very active Amateur Radio Contest Group based in North Lancashire. On their website they write: “Sands Contest Group was formed in 2004 by several friends who wanted to be more active with their hobby and to improve their techniques and skills. Members have skills and interests in various fields of the hobby, including QRP, construction, antenna modelling, data modes and computing.” From what I understand this is all about radio’s, amplifiers, aerials, callsigns and connecting with other stations all over the world presumably.

The group is based at Jura House, close to Craighouse, and from what I have read they have a great time, weatherwise and radiowise. On the 23rd of September they write on on their blog: “Up and running now and so far and over 1000 qso’s by mid afternoon! All bands seem in reasonable condition and contacts are coming in very fast indeed. The sun continues to shine, we could not have asked for a better week!” One day later they write: “Unfortunately the sun hasn’t shone on us after all but never mind. Very busy on 20m today, Paul and Steve are still down on the beach about 2 miles from Craighouse. At the moment we don’t know how many contacts they have made but according to sources they have had a good day.”. Today, after another beautiful start they write: “At the moment we have over 5000 different stations worked in the log!” I am not a radio amateur and I’m not sure what this all means but from what I read the group on Jura have achieved something really well, which doesn’t surprise me being on such an inspiring island!