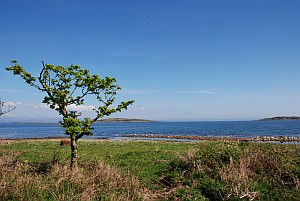 It’s probably the time of year that people return from their summer holidays and start posting on their websites or blogs about their whereabouts. Today I found another report about Jura from a family who arrived by boat in the Small Isles Bay and spent some time on the island. It’s interesting, specially for people who own a boat, to read what facilities Jura has when you arrive over the water. Below some fragments of the post from the blog called Sun Dog Sailing Blog:

August 4 – After breakfast we decided to use the tide again and head for Craighouse on Jura which again we had to do under engine as there was no wind; but it was lovely to be under a warm blue sky and it was only a few hours until we were turning in past the Small Isles and picking up a mooring buoy close into the shore. The bay has quite a number of mooring buoys for visitors and we are fortunate enough having a shallow enough draft to get the spare one near the shore on the 2m contour – which was fine for us as the forecast was for a period of settled weather so no waves to reduce the depth. We had to get ashore and get some provisions and also use the laundry facilities behind the Jura Hotel, so it was out with the dinghy and a bit of exercise with the pump, then over to the pontoon provided for dinghies at the pier. Jura is a large island with a population of slightly less that 200 people in total, so the facilities they provide are very good all things considered, and should be supported. Cost for one night on the mooring was £10.