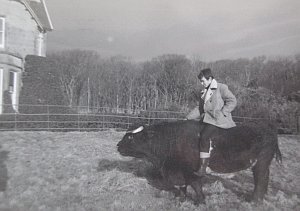 A while ago Clive Loveless contacted me through the Jura Info website. Clive had sent me some of his fond memories of the island when he visited it first in 1963 after finding an image of the Paps at a London Fair. I have contacted Clive and asked him if I could publish his memories and images on my blog and he kindly agreed.

Clive Loveless: The other week I was at the London Print Fair at the Royal Academy and walking down the aisle of stands I suddenly see an image which immediately connected. It was an etching by a Jason Hicklin of “The Paps of Jura”, 2008. The image struck me strongly with its brooding quality that I bought it on the spot and, now on the wall of my London flat, it resonates with vibrations and memories of the past. So to explain….

Maybe around 1963 my parents, English and Welsh, not Scots were employed by the Riley-Smith Estate to manage the Craighouse Inn and restaurant. I remember my first trip up there, pre-Christmas 1963 on the MacBrayne’s ferry from West Loch Tarbert, arriving at the quay in Small Isles Bay, in the dark. I fell in love with the island.. its wildness and warmth… right there and then.

I was about 20 and soon meeting the locals, drinking the whisky (the old distillery was just about to re-open again) and joining in the ceilidhs. Then, challenged by another young local man, whose name I think was John James Mackay (?), I climbed with him all three Paps in one day! And what a day it was… adders in the heather… eagles soaring above.. the incredible views.. what a day to share with another young fellow.. a stranger.. but not really!

I truly fell in love with the place, the atmosphere, the light and even took some girl friends up there to share my enthusiasm of the island including the late Wendy Richard of “East Enders” fame who immediately became a star with the locals… if not notorious for fighting off Greater Black Backed Gulls with an oar as they dived upon our little rowing boat and barking Beagle hound on a sunny day in Small Isles Bay.

Another strong memory was a visit by Land Rover and final foot trek to visit Barnhill, the home of my literary hero, George Orwell or “Mr. Blair” to the locals. How extraordinary to set foot in the house where “1984” was written and then feel the experience of the Corryvreckan whirlpool thrashing a few paces away. I’d never seen anything like it!

I can’t believe I last visited after my parents, Tony and Joan, had left the Inn due to the sea strikes of the late ‘60’s.. finally taking my then wife to be, Jane, there in 1970. Maybe the memories are so clear and strong that I don’t want to crack, even shatter, them from so long ago by visiting again…..it all seems so close and recent as I look at my “Paps of Jura” etching on the wall…

For more information on the artist Jason Hicklin visit his website at www.jasonhicklin.com