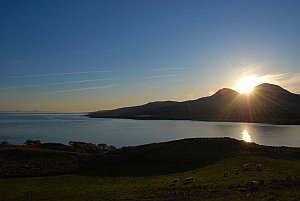 The Westmorland Gazette reports this morning that Rob Jebb conquered the Paps of Jura to win the Isle of Jura Fell Race for the second time on Saturday. Jebb, from Staveley, finished six minutes clear of Bingley Harriers teammate Ian Holmes as he darted around the 16-mile-course on the isle to the west of the Scottish coastline in 3:28:36. He said: “It is a unique race on an island and I am really pleased to win it. It is one of the most classic on the calendar and its always a good aim for runners.

“I went a bit wrong early on but I got back to the pack. Two guys had got away but I caught up with them and won by a few minutes.” Jebb said it is a commitment just to get to Jura but he has entered the race many times and should be back in the future, hoping for a third win.