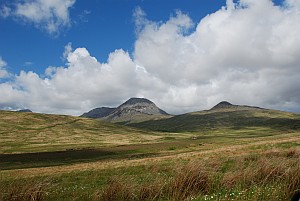 This tour over the island will start at Feolin, which will be the place where the majority of visitors set foot on Jura for the first time. Feolin itself is nothing more than an anchoring place for the ferry and starting point for the only road on Jura, officially classified as the A846, which is actually more then it deserves in some places. The Ferry House is the only house at Feolin and used to be the house of the ferryman in earlier days. Nowadays you will find a photographic gallery, owned by the same person as the small isles catering van next to the ferry terminal. The single track road follows the Sound of Islay south-east for the first few miles before it turns north-east just after Jura House, built around 1880 by the Campbells of Jura. There is a beautiful walled garden open for visitors near Jura House and well worth a visit. Jura House itself is not open for the public. There are a couple of small islands situated off the southern coast of Jura, Am Fraoch Eilean to the south-west of Jura House and Brosdale Island to the south-east. On the first of these are the remains of Claig Castle, one of the sea fortresses that were used by by the Lords of the Isles to control traffic in the seas around the Hebridean islands.

After another three miles heading north-east the little village of Craighouse appears, which is the main village on Jura. Here most people live and this is also the place of Juras only whisky distillery, which is open for visitors by appointment only. Craighouse is a very quiet and lovely little village, home to the Jura Hotel, the local village shop and post office, a gift shop/tea room, village hall and the local Parish Church which is open for visitors. This church has a room in the back of the building with a display of old photographs. The village sits overlooking a bay with a group of islands that are known collectively as the Small Isles. Beyond these islands, Knapdale on the mainland is separated from Jura by the stretch of water known as the Sound of Jura.

To the north of Small Isles Bay, immediately after the main road has crossed the Corran River, a turning to the right leads to Knockrome and Ardfernal. The river runs into Loch na Mile to the south while Ardfernal overlooks Lowlandmans Bay to the north-east, which is almost completely closed off by the rocky promontory known as Rubhan Leim. 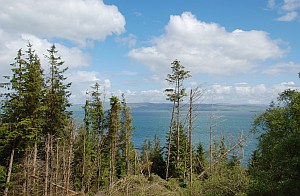 Back on the main road and heading north once more, Beinn Shiantaidh rises up to the west giving as close a view as possible of one of the Paps without having to leave the road. Lagg, which used to be a ferry port for Knapdale especially during the period when cattle droving was common, is closely followed by Tarbert. At this point Jura is almost cut in two by Loch Tarbert that slices into the western side of the island, with Tarbert in the east only being a mile from the tip of the loch itself. Just beyound the standing stone on the right of the road, a little track leads to Loch Tarbert. This is a short walk of around 20 minutes and takes the visitor to the “other side” of Jura. The main road continues north, but not for much further.

Near Ardlussa, just after crossing the Lussa River, the road, which has now narrowed even more than it already was, splits, with the southern branch heading towards Inverlussa where the river enters the bay of the same name. Meanwhile the other branch continues north-east almost reaching that end of the island, although by the time it reaches its final destination it can barely be described as a road. From here it is a private road and is closed to vehicles. If you wish to proceed you have to leave the car at “road end” and continue on foot for a further five miles to Barnhill and Kinundrach, almost at the northern tip.

Use the controls on the dynamic map below to take a virtual tour of Jura using Google Streetview. The start location is Feolin right after you drive off the ferry.