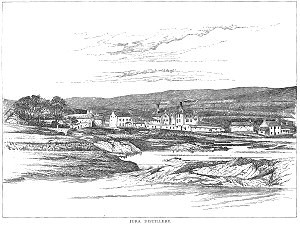 From Tarbert we reached Jura by Mr. MacBrayne’s steamer “Fingal”, which leaves the mails every Monday. The route was for the most part the same as that traversed on our journey to Islay. The name of Jura recalls to our memories just such a lovely day as when, standing on the pier at Caol Ila, we first saw the island across the Islay Sound. The appearance of Jura from this position is very romantic, the mountains rising precipitately from the sea, same of them to the height of 2,500 feet above sea level. Three of these monster rocks are called “Paps of Jura”, so named from their peculiar share. Upon these majestic heights no trees strike root, and here and there beetling crags project, with no shadow to break their terrible ruggedness, whilst at their base are everywhere strewn gigantic boulders. The principal denizens of these weird rocks are eagles, red deer, and grouse. The Island of Jura is thirty miles long and seven broad, and contains a population of nearly a thousand persons. Its bays possess all the charms of Oban in miniature, and the mountain lochs team with trout.

Craighouse, where the Distillery is planted, is on the eastern or habitable side of the island, and is the only place that can be cal led a village. It stands at the head of a small bay, and boasts of a handsome pier, which was erected by Messrs. James Ferguson & Sons. On landing we immediately proceeded to the Distillery, accompanied by Mr. Fraser, the courteous manager, who had met us at the boat. As there were yet several hours before sunset we took the opportunity of exploring the surroundings of the Distillery, and visited the Craig bum and waterfall. Then, at the suggestion of Mr. Fraser, we directed our steps to the three lochs, or watersheds, which feed the magnificent bum flowing past the Distillery. We ascended the hill at the back and found a path which fan along the banks of the hum, and although up h.111 and down dale, it proved a very pleasant ramble. The burn danced merrily over its rocky bed, making innumerable falls and cascades, and we were struck with the brightness and purity of the water after an hour’s toilsome ascent we reached the largest of the lochs, situated about three miles from the Distillery, and a magnificent view presented itself when we reached these heights. Looking above and below the scene embraced extremes of fertility and desolation: above, sterile rocks, over which clouds and mist hung which were sometimes lifted, and revealed tremendous masses of rock projecting from the lofty mountain above; below, well cultivated crofters’ holdings and the rich verdure of the lower stretches of the mountain were revealed. Returning by another way we passed the two smaller lochs already referred to, abounding in trout preserved by the proprietors of the Distillery.

It was now evening, but we were nearly home, and out path, if not welt lighted was beautified by the soft light of the setting gun. On Teaching the house which Mr. Ferguson had courteously placed at our disposal during our visit to the island, we found a meal ready, to which, after the long walk, we brought a good appetite. In Jura the inhabitants are beyond the reach of anything but dairy produce, potatoes and fish; occasionally a mountain sheep is kilted and divided among the community, but, as a rule, it is a question of a daily forage for a day’s supply of food. We were, however, quite content with the repast provided. Rising early the next morning we proceeded to inspect the establishment. It is one of the handsomest we have seen, and from the bay looks more like a caste than a Distillery. It is the highest building on the island, and the most elevated portion farms the summer residence of the proprietors.

The works cover nearly three acres of ground, and are situated close to the pier, and a beautifully wooded glen. The Distilling and Mashing House consist of a lofty and solid stone block of buildings, which are visible for many miles round, and attached thereto are the old Maltings and Warehouses, which are built round a court yard. The new Maltings are pitched higher up the slopes of the hill, but nevertheless they communicate wit4 the other parts of the works. There is no steam engine on the premises, all the work being clone by water and gravitation. The works are entirely enclosed by the buildings, and entrance thereto is obtained through a gateway facing the sea. The Distillery, which was established in the year 1810, came into the hands of Messrs. James Ferguson and Sons in the year 1875, who immediately set about its restoration, and have added new buildings, machinery, and appliances of the most modem description, at a cost of over 125,000; the establishment is now said to be one of the easiest worked Distilleries in the district.

The buildings have a frontage to the sea of same 500 feet, and are arranged in several sections, the central and lofty building al ready referred to being the Distillery proper. We first visited the No. 1 Maltings at the top of the hill, a granite structure consisting of three floors 138 feet long and 48 feet broad, the top floor of which is used for storing barley, and wilt hold 4,000 quarters. The middle floor, for malting, is paved with tiles, and the metal Steep connected therewith is placed on the upper floor, and wets 140 quarters at one time, discharging its contents from the bottom; the lower floor is a Warehouse. At the north end there is a Kiln 48 feet square, floored with steel wire netting- Hermann’s patent. It is lighted by six windows, possesses four patent ventilators, and bas two entrances enclosed by double iron doors. Passing on to the adjoining chamber, we found ourselves in the Malt Deposit, the top floor of a wing of the central and main building, an apartment 120 feet long, and so arranged that it is commanded by bath Kilns. The Mill and Mash House are underneath. We next descended to the ground floor, and crossed a terrace to the No. 2 Maltings lower down; they are of the same dimensions as the new Maltings al ready described, and originally formed part of the old Distillery. There is also another Malting of smaller dimensions, with a Warehouse below.

We were next taken to the Mill, which contains a pair of Malt Crushers, and from thence to the Grist Loft, in which there are two large Grist Hoppers, Which reed the Mash-tun. Still descending, we then passed on to the Brewing House, a neat building 35 feet long by 25 feet broad, which contains a metal Mash-tun 20 feet in diameter by 5 feet deep, with stirring gear driven by the water-wheel here also we observed two Heating Tanks, holding together 3,000 gallons, which supply hot water to a Mashing-machine, which mixes the grist before it reaches the Mashtun. From the Tun the worts are pumped to a Receiver or Underback in the Tun Room, holding 8,000 gallons, and afterwards pass through the two Morton’s Refrigerators fixed on a staging above, cal led the Cooler House. We should here add that the sparge and draff are pumped up to a second Mash-tun, where they are drained off into two Heating Tanks to be mixed with the next grist. The Tun room, which forms part of the Still House, is at the eastern end and is one of the loftiest houses we have yet seen; it is 6o feet high, 100 long, and 44 broad, and lighted by twelve windows. Therein are four Washbacks, each holding 13,000 gallons, and a Wash Charger of the same capacity, the latter so placed that it commands the Stills.

Our attention was then directed to the three Pot Stills-one of them, a Wash Still, contains 6,650 gallons; the other two, which are Spirit Stills, hold 2,350 and 1,200 gallons respectively. On a second gallery we observed the Spirit Receiver, a handsome vessel holding 5,000 gallons, and the Lowwines and Feints Charger, holding 6,934 gallons, and the Safe. The wheel which drives the Still rummagers is 18 Inches wide and 12 feet in diameter, and is placed below the Worm Tubs. The two latter vessels are elevated on brick piers 40 feet from the ground, and are supplied with water direct from the stream. Leaving the larger building, we turned to the left, and reached the Spirit Store, a new cement building 50 feet square, which contains a Vat holding 673 gallons, and the weighing apparatus, and afterwards inspected the four Warehouses, wherein the Whisky is stored. One of them is 165 feet by 150 feet broad, and the whole together will store 5,500 casks.

At the time of our visit they held 3,504 casks, containing 232,000 gallons of Whisky of various ages. The Boiler House is contiguous to the Distilling House, and contains a steam boiler, 22 feet long and 5 feet in diameter, for heating water there is only one pump on the premises. The Turbine water-wheel was erected by Messrs. Smith & Co., of Glasgow; it is of simple construction, and yet wonderful power, and capable of flooding the whole place in ten minutes. It is sunk just opposite an excavation in the hum called the smuggler’s hole, lately filled up, the entrance to which is now covered with ferns. It is the very place where the smuggling founder of the Distillery, a century ago, for many years carried on his operations without discovery; and the tiny stream, tapped from the hum which ran through the centre of the cave, had to be stopped up by the present owners, when the hole was filled up.

Opposite there is a fine Cooperage and carpenter’s shop, also a cask shed. The manager, Mr. William Fraser, resides on the premises, and Mr. John Mulqueen, the Excise officer, dwells in a house built on the water’s edge. The workmen’s houses farm the street of the village, and they have small plots of ground allotted to them by the Distillers, which are splendidly cultivated. The small farm attached to the Distillery is only twenty acres, but quite sufficient for the requirements of the fine cart horses and few beasts kept by the proprietors.

The Whisky is pure Highland Malt, and the annual output in 1884-85 was 60,339 gallons, 1885-86 65,000 gallons, but the works are capable of making 180,000 gallons. We had just finished our tour of inspection when the steamer came in sight, Mr. Macbrayne having permitted the captain to call for us. Bidding good-bye to our friends, we left Jura with regret, cherishing in our hearts the hope that we might return at some future day.