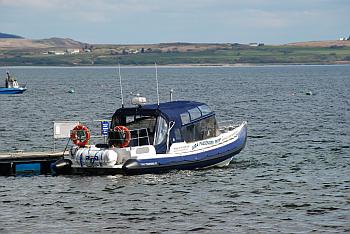 When I read the sad news about the Jura Passenger Ferry on Friday I Tweeted “Bugger… No funding for Jura Passenger Ferry”. The Jura Passenger Ferry service between Tayvallich and Craighouse, operated by the Isle of Jura Development Trust, won’t sail due to a loss of necessary funding. The funds to keep the service running were not awarded by the Argyll and Bute Council due to their ongoing budget cuts. The summer passenger ferry service between Jura and Tayvallich on the mainland will now not be able to run as a result of losing its £24,196 grant unless other resources can be found. Losing the ferry sets the island back four years and tourists and islanders will have to rely on the ferry to Islay again, which means a lengthy detour to reach the mainland. This was the situation before the pilot with the Passenger Ferry started in 2008. What it most likely means for the island is that less tourists will visit Jura, a daytrip from the mainland is now no longer possible. This will have a serious impact on the already fragile economy of the island. Islay councillor Robin Currie, the council’s spokesman for islands, said: “It is an extremely sad day when the council takes a decision not to grant funding for a ferry. Everyone knows that, if it stops just for one year, it will never start up again. “Jura is a very vulnerable island. Apart from Iona, it is the only island where you have got to go to another island to get to the mainland. “If the ferry doesn’t operate this summer there is a possibility that some businesses on Jura will fold.”

On a personal note I’ve often wondered why Jura had such a different position in the larger West of Scotland Calmac dominated ferry system. After all, Jura has a larger population than some other islands on the west coast of Scotland who do have their own, or indirect, Calmac Ferry such as Gigha, Rum, Coll and Lismore. One can argue that these islands have no alternative ferry route via another island but Jura wouldn’t need an alternative ferry link via Islay either if it would have a direct link with the mainland. In my humble opinion having a direct link to the mainland is the only way the island would be able to develop economically in the future. And that direct link could be a passenger ferry or a combined car/passenger ferry. We know already that money will be lost anyway, be it through a loss making Calmac Ferry service such as the one on Gigha or through a subsidised council ferry. Most ferry routes in the west of Scotland are already heavily subsidised by the Scottish Government anyway so why pull the the plug on Jura, doesn’t this island need a “lifeline ferryservice”? I think it’s a shame that a government, regional or national, takes away money from Jura for the passenger ferry and gives it back to the Western Isles in the form of Road Equivalent Tariff (RET). This way they benefit local businesses and accommodation providers in the western Isles over the backs of businesses in Argyll and in this case Jura in particular. I know you can’t really compare the two different schemes but in my opinion this is just not right!

So what about the future? I guess when the necessary funds can be found the service will run again but at this moment I understand it’s very uncertain if and when this will happen. All I can recommend now is to visit the Jura Passenger Ferry website for the latest information, to make a donation and to hope for the best!