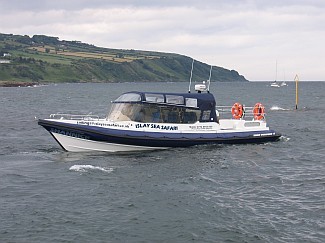 The three week passenger ferry trial has been successfully completed with 30 return trips made and just one day lost to the weather. A total of 220 passengers were carried which represents a load factor of approximately one third capacity. The very limited time between deciding that we could run the trial and actually starting it, meant that it was not possible to advertise the service other than locally on Jura and at Tayvallich. This is reflected in the usage which increased week by week as more of us became aware that we could make a day trip to the mainland and visitors realised that they could get to Jura. The service also proved a real hit with Jurachs exiled on the mainland, who quickly realised that frequent weekend visits were now a practical proposition. Adding this real usage of the ferry to the data we have collected from our marketing survey shows there is real demand for this service.