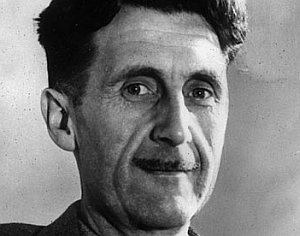 There is a very interesting article in the online Guardian, written by Robert McCrum, about George Orwell, the writer responsible for the novel 1984, which is written in the north of Jura at Barnhill. A quote from the intro text: “Here, Robert McCrum tells the compelling story of Orwell’s torturous stay on the island where the author, close to death and beset by creative demons, was engaged in a feverish race to finish the book.” The article describes some of the last moments of George Orwell and the difficulties he had to finish the book. If you think Orwell’s stay in Barnhill was a remote and romantic one you might as well stop reading. It was far from that as you can read in the article of which I have quoted some imteresting paragraphs:

In May 1946 Orwell, still picking up the shattered pieces of his life after he became a widower, took the train for the long and arduous journey to Jura. He told his friend Arthur Koestler that it was “almost like stocking up ship for an arctic voyage”. It was a risky move; Orwell was not in good health. The winter of 1946-47 was one of the coldest of the century. Barnhill, overlooking the sea at the top of a potholed track, was not large, with four small bedrooms above a spacious kitchen. Life was simple, even primitive. There was no electricity. Orwell used Calor gas to cook and to heat water. Storm lanterns burned paraffin. In the evenings he also burned peat. He was still chain-smoking black shag tobacco in roll-up cigarettes: the fug in the house was cosy but not healthy. A battery radio was the only connection with the outside world. He was working at a feverish pace. Visitors to Barnhill recall the sound of his typewriter pounding away upstairs in his bedroom. Then, in November, tended by the faithful Avril, he collapsed with “inflammation of the lungs” and told Koestler that he was “very ill in bed”. Just before Christmas, in a letter to an Observer colleague, he broke the news he had always dreaded. Finally he had been diagnosed with TB.

By mid-November, too weak to walk, he retired to bed to tackle “the grisly job” of typing the book on his “decrepit typewriter” by himself. Sustained by endless roll-ups, pots of coffee, strong tea and the warmth of his paraffin heater, with gales buffeting Barnhill, night and day, he struggled on. By 30 November 1948 it was virtually done. Nineteen Eighty-Four was published on 8 June 1949 and was almost universally recognised as a masterpiece, even by Winston Churchill, who told his doctor that he had read it twice. Orwell’s health continued to decline. In October 1949, in his room at University College hospital, he married Sonia Brownell, with David Astor as best man. It was a fleeting moment of happiness; he lingered into the new year of 1950. In the small hours of 21 January he suffered a massive haemorrhage in hospital and died alone at the age of 46.