The average day tripper to the Isle of Jura will probably never make it much further then Craighouse, Lagg or Tarbert and why should they with so much stunning scenery to be enjoyed. There are some however that go as far as Lussagiven or Ardlussa over the “Long Road” but when the first gate appears just beyond Ardlussa people consider this the end of the road and head back. Understandable, the quality of the road isn’t that great and you never know if it’s permitted to cross the first gate after Ardlussa let alone the two other gates that you have to pass on your way to Lealt and beyond. It is at Lealt, well half a mile further after the bridge, that you are no longer allowed to travel on by car and it is also here where you’ll find a wee parking space for a few cars and that’s it. End of Road. Well more or less, the road changes into a track called “the path to Corryvreckan”. There is a sign that says “Road End” and another sign with Barnhill 4 miles, Kinuachdrachd 5 miles and Corryvreckan 7 miles, on foot that is, unless you have arranged transport via the estate. It’s really no use to continue further north by car, the track is of a poor quality and there is a chain across the track attached to poles with a padlock. 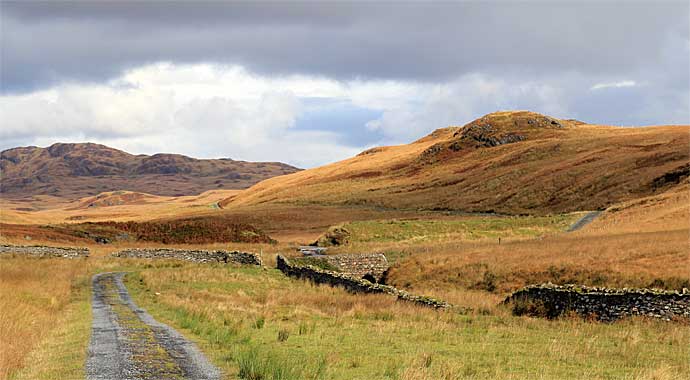 Approaching the End of the Road in North Jura

North Jura and the track to Barnhill (right)

The more adventurous are likely to head on and continue to Barnhill to have a peek at the cottage where George Orwell wrote his famous novell 1984, which he did in the years 1946 to 1948. If you do belong to the the George Orwell fans and make the pilgrimage to Barnhill don’t forget that it’s a holiday cottage now and its visitors are likely not that keen to have folk staring through the windows, it’s the privacy and solitude why they probably rented the cottage in the first place! From Barnhill it’s a few miles more north to the Corryvreckan whirlpool between the north end of Jura and the Isle of Scarba. This part of Jura, together with the western half of the island, is one of the more remote parts of Scotland and a walk on the track from the parking space after Lealt bridge towards Barnhill is something very special. It’s here that you really are in the middle of nowhere. There are no nearby pubs, no farms, no people and there is no mobile phone signal. There is just you, the stunning scenery, the total silence, the views over the Sound of Jura and a whole lot of flora and fauna to enjoy including Red Deer and Eagles. Come prepared though, the weather can be treacherous and out here you are really on your own! Enjoy!

North Jura and the view over the Sound of Jura