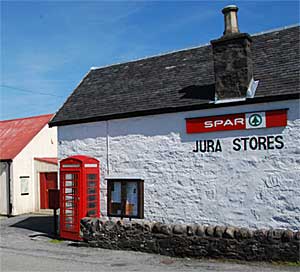 Herald Scotland online newspaper published an article about a possible buyout of the island’s only shop, Jura Stores in Craighouse, to secure it’s future. The current owners have run it since 1990 and have been trying to sell the business. According to the article the shop owners find it increasingly difficult to keep the shop open and despite advertising it for sale there was no interest so far. The history of Jura Stores goes back to the 1890’s and it will be quite a blow for the island if the shop would close permanently. Mind you, alternatives are on the neighbouring Isle of Islay, in Port Askaig, and further away in Bridgend and Bowmore. All three require a lengthy 10 mile journey from Craighouse to Feolin and a ferry crossing to Port Askaig. That is why the 200 residents of Jura are mounting a community buyout in a bid to secure the future of the island’s only shop. A quote from the article:

Now they have approached the community-led Jura Development Trust, who have applied successfully to Scottish ministers to exercise a Community Right to Buy under land reform legislation. A price will be set by an independent valuer, and islanders balloted. Peter Wotherspoon, secretary of the Jura Development Trust, said: “It is absolutely vital we secure the shop. Imagine what it would like to lose our only shop. The next one is at Bowmore on Islay, a drive and a ferry journey away. “I have done it by public transport and it takes five hours there and back. That’s from Craighouse, but more than half Jura’s population live further north.” He said they were working closely with the shop’s owners, Steve and Beth Martin, but the community had made clear they were desperate to keep the shop open. So they were already talking to Highlands and Islands Enterprise, the National Lottery and other funding bodies.